Have been riding motorcycles in different states since 1980 and in over four decades of riding I have had my share of Honda’s and Yamaha’s. When I walked into a Honda or Yamaha dealer, ready to buy a motorcycle, never did I visit more than one dealer and always rode away with a motorcycle. Purchasing a motorcycle is an experience in and of itself, but having driven a few miles on motorcycles, my last motorcycle had over 35k miles and had a bidding war when I sold it, I thought I had a handle on the purchase procedures! My current motorcycle and the topic and reason for this page is a 2012 Victory Kingpin. Purchased with eight miles on the odometer, after eight months of ownership, had over 8k miles and no, I do not use the motorcycle to commute to work.

Yep it all started back when a friend asked if I wanted to go to a demo ride of Victory Motorcycles. Never knowing the hoops I would have to jump through to purchase my 2012 Victory Kingpin. Having to visit three different dealerships within South Florida, Greater Motorsports of Palm Beach is where I ended up spending my money. Purchased; March 2013. October 2013 the rear drive pulley sheared from the wheel. When trying to have resolved Greater Motorsports of Palm Beach refused to service the bike and had to send it up to Fort Pierce (103 miles away) to have repaired.

If the dealers that Polaris had signed had been competent, service orientated Victory Motorcycles would probably still be in production but it was not to be. 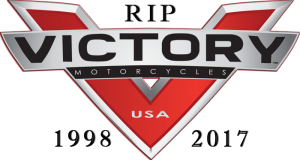 The Victory Motorcycle motto of “Ride One and You’ll Own One” is very true!

The factory demo rides that were offered throughout the country during the year were a great way for a prospective customer to not only ride any Victory Motorcycle, but also get an idea of the type of ride they will enjoy. No other motorcycle manufacturer, that I am aware of at the time of writing, offers the ability to ride before you buy. Whether it is Touring, Bagger or Cruiser, you have the ability to ride each one and make your own decision. I learned that I was not personally comfortable on a Touring or Bagger type of motorcycle, enjoying the Cruiser type of ride. Usually it’s, buy it and if you don’t like the motorcycle you selected; tough!

With all the investment Victory makes to acquire a customer, the dealer network here in Florida must cost Victory sales! If, what I went through to purchase my Victory Motorcycle is any indication, I would not expect many people would put up with it, let alone subject themselves to it. As evidence to the statement, all three dealers had 2012 Victory Kingpins on their showroom floor as year old models (wonder why they did not sell earlier, in two out of the three dealers I visited, I can understand why they did not sell!)

Many die hard Victory Motorcycle owners dumped their bikes shortly after the January 7th, 2017 production stoppage announcement. Plunging prices of both parts and every model produced. Seriously considering doing the same around the time, but then after some thought I came to the realization of why I purchased in the first place, it seems like a no brainer, the first reason I bought the bike was the ride! The fact that, other than the drive pulley issue the bike has been flawless. Change the oil, tires and make sure the right places are lubed and it is a great bike!

Having no complaints, flawless performance, it makes no sense to sell it and instead have been taking advantage of the unbelievable pricing of parts that are being dumped and stocking them if I ever have an issue. If I don’t I can always recoup my costs when reselling.

Overall, I believe with time Victory Motorcycles will eventually increase values simply because of it’s flawless performance and exceptional value!

Really feel very lucky to have the opportunity to purchase my 2012 Victory Kingpin and will ride it; till the wheels fall off!