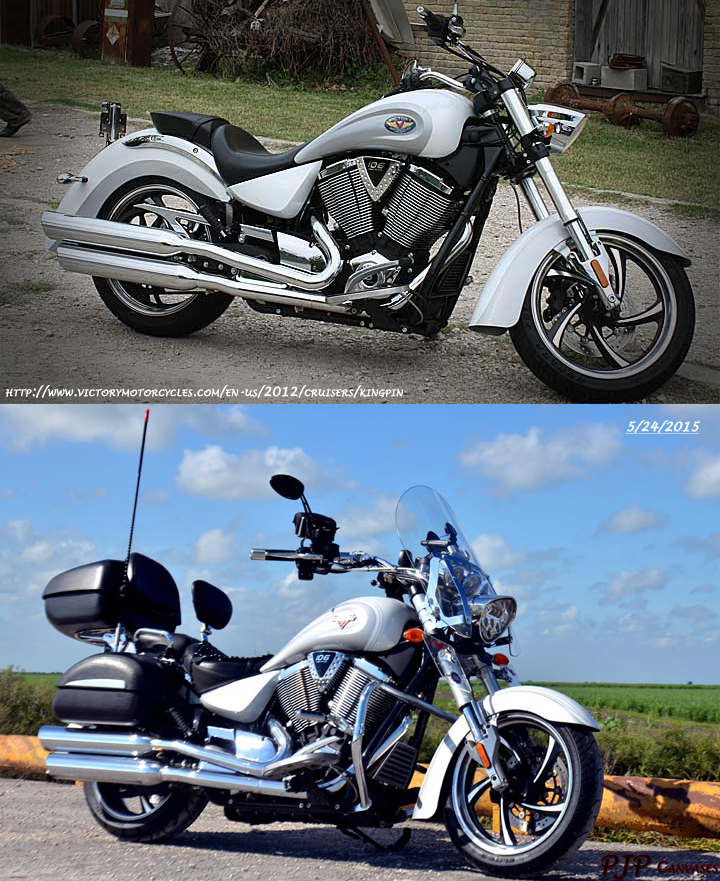 Whenever riding and especially when visiting a Victory / Indian / Polaris Dealer, responses about the accessories mounted on this 2012 Victory Kingpin have been guarded curiosity, if not, complete disbelief that with the amount of accessories, the Kingpin continues to operate flawlessly.

With the exception of having anyone in the Victory / Indian / Polaris Dealer network doing any work and the resulting documented issues, the 2012 Victory Kingpin has gotten better with miles behind it.

Updating the page with rides and noticed the term “Custom” as the caption for the image above. Have revised the caption to “Custom Factory OEM” (Original Equipment Manufacturer), the reasoning being of all the added accessories “Custom”, only one would be considered “Custom” to the true “Custom” builders out there.

The Citizens Band (CB) Antenna Mount was the only thing personally hand crafted “Custom” on the 2012 Victory Kingpin. The KewlMetal Luggage Rack – Chrome and the HeliBars Horizon Rebel HZ700SR multi-axis adjustable handlebar system originally designed for HD, yes that HD, but fitted to the 2012 Victory Kingpin would be considered “OEM After-Market”. Every other piece bolted to it is “OEM Accessory” & “OEM After-Market”.

Purchasing the 2012 Victory Kingpin at the now Out of Business Greater Motorsports of Palm Beach. The first scheduled service at 5,000 miles, having the oil changed the incompetent mechanics under the supervision of the Service Manager Kurt Reickel at the time, stripped the Oil Drain Plug in the crankcase. After trying many different ways to repair the issue, Arizona Victory Oil Drain Repair Kit did the trick and totally resolved the problem created by the most incompetent service staff I have ever encountered!

Looks like you now have to call to get price or purchase, no longer available for online purchase.

This website uses cookies to improve your experience while you navigate through the website. Out of these, the cookies that are categorized as necessary are stored on your browser as they are essential for the working of basic functionalities of the website. We also use third-party cookies that help us analyze and understand how you use this website. These cookies will be stored in your browser only with your consent. You also have the option to opt-out of these cookies. But opting out of some of these cookies may affect your browsing experience.
Necessary Always Enabled

Any cookies that may not be particularly necessary for the website to function and is used specifically to collect user personal data via analytics, ads, other embedded contents are termed as non-necessary cookies. It is mandatory to procure user consent prior to running these cookies on your website.

SAVE & ACCEPT
Go to Top